From Nuclear Heritage
Jump to navigationJump to search
Shortcut to this page: http://castor2010.nuclear-heritage.net

support the Dalle blockade activists - criminal cases have been opened as of March 2012!

Before the Castor train started to Germany the containers were brought to Valogne. There the shipment started on November 5th. There were several blockades in France and finally the French police sent the transport on a new route that wasn't part of the original plans or alternative routes. Obviously they wanted to avoid the blockades of castor opponents and risked to use a new route that had not been prepared for the transport.

The border to Germany was supposed to be crossed at Lauterbourg. There was a huge blockade of about 2,000 activists on the tracks near to the village of Berg. The police tried to remove people from the tracks but gave up soon, because it would have taken to much time. The transport was sent back a certain distance and tried another passage using another route now. Also in Germany many blockades and actions took part and caused a long delay of the transport schedule. In Dalle near Celle a group of activists delayed the Castor shipment for some three hours when three activists had been locked-on at the tracks with tubes.

After reaching the train station in Lüneburg the transport had to pass an area of some 40 kilometers to Dannenberg. This connection was only in usage for the Castor transport during these days, and since many years it is one of the main action fields for the anti-nuclear resistance at Castor transports. This year two main actions with several thousands of activists took part on the tracks: "Castor? Schottern!" and "Widersetzen". Widersetzen is a non-violent sit-in blockade organized by local activists of the Wendland region. Castor Schottern intended to remove gravel from the tracks to make them unusable for the Castor transport. It was organized by a wide alliance of organizations and individuals and with support by popular persons. Anyway, it was the target of heavy attempts of criminalization by police and of violence by the state forces.

In Dannenberg the transport had to be reloaded from the train to trucks. This took about ten hours - originally the police had planned to send the shipment directly afterwards on the road to the repository in Gorleben, some 20 kilometers away. But there was a successful blockade by Greenpeace with a truck in front of the train station on a road the transport had to pass. Several activists had locked-on themselves to a concrete pyramide inside the truck that had been let down through the floor of the truck onto the road and was fixed to the asphalt. The police needed more then half a day to figure out the construction of the blockade and to remove the activists.

At the same time several other blockades of the two transport roads and support roads for the police had taken place - mostly realized by tractors of local farmers. In Gorleben in front of the temporary repository another big sit-in blockade of several thousands of activists took place since Sunday morning, organized by the non-violent campaign "X1000mal quer". The police started to take them away on Monday morning at half past three and needed more than three hours to clear the road. Afterwards the road transport started from Dannenberg to Gorleben, accompanied by several other actions that were not able to interrupt the transport again.

Alltogether some 25,000 activists had blockaded the Castor transport according to the police and some 20,000 officers were in operation to protect the shipment of the nuclear industry. The police treated activists especially on the tracks with much violence and injured some 1,000 persons with pepper spray, horses, by beating and other means. At the same time a few dozen police officers were - according to the police - injured by anti-castor activists.

There will be a big opening demonstration in Dannenberg on the 6th November and several actions of civil disobedience on the following days. The nuclear transports to Gorleben always have been a key event for the German anti-nuclear and direct action movement. The protest has a lot of support from the local people.

You find the English translation of the Mobilisation Call against the CASTOR transport here.

Come to Gorleben and join us!

International guests can APPLY FOR FINANCIAL SUPPORT to cover traveling expenses. Please send your request with the approximate amount (we try to cover max. 200 Euros) to littleblacknemo AT riseup.net[1]. 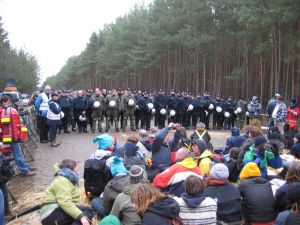 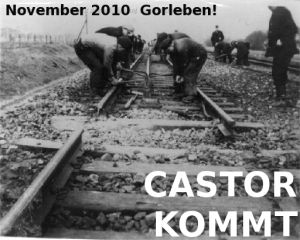 Gorleben is in the Wendland, an area in the north of Germany near Lüneburg. Most of the actions happen there, the nuclear waste will be transported on a train between Lüneburg and Dannenberg (approx. 50 km) and then changes to lorries. From there, it will be transported on the roads (approx. 30 km) to its destination in Gorleben.

There will be direct contact to the organizers of the camp in Splietau, who are prepared for supporting international visitors - an email address and one week before the transport also a mobile phone number.

The Nuclear Heritage Network as an informal network of international activists will help to connect each other as in other anti-nuclear events, too. Here are contact information to be used especially during the days before the transport starts. When it will have started in France on November 5, it will probably not be possible anymore to follow emails, and maybe also the phone won't be online always. So please try also the local (Splietau camp) contacts after November 5.

General reception point for international guests will be at the camp in Splietau, close to Dannenberg. It is the same location where the big opening demonstration will take place.

Unless you have contacts elsewhere, we advise you to come here.

Here you will find several big tents to sleep, as well as a camp ground to set up your own tent. From Splietau you can explore the different forms of protest. Camp organisers at the info point are willing to help you to find your way around. A communal kitchen will provide warm food and drink.

Important: Please bring a sleeping bag and a sleeping mattress or get in touch with your German contacts to organise these for you! We cannot provide sleeping blankets and mattresses!

Remember: it is likely to become VERY cold, so bring warm, weatherproof clothes.

Besides Splietau there are a number of other camps where you can stay, some of them connect to a specific form of action. It is usually no problem to find a place to stay during the action days. The info points in Dannenberg and Splietau will help you finding a private accommodation.

Other camps along the transport route are in:

Info points can be found in:

The protest in the Wendland is always very diverse ‒ there will be very different kinds of actions.

This idea of action comes from different groups and sound collectives connected in the Hedonistic International (HI). Equipped with mobile sound systems they plan to block the CASTOR transport by masses of dancing people. official webpage

Widersetzen will attempt to block the rail tracks by massive, peaceful sit-ins. Meeting point is at the camp in Hitzacker. official webpage

A huge mass action took place in Berg nearby the French border. Several thousands of people protested against the nuclear waste transport and entered the tracks to blockade the shipment. The police started to remove the people, but finally decided to send the high level radioactive transport back for a certain distance and to use another place to pass the border. It was the biggest anti-Castor blockade in southern Germany ever.

Several camps and info points were provided by a number of organizations and action groups in the Wendland region. One of them was the info point Essowiese in Dannenberg. It was organized by the "BI Lüchow-Dannenberg" (Local citizens' initiative Lüchow-Dannenberg).

This art action was shown on a table at the Essowiese info point in Dannenberg. It was a creative rally of soft toys with banners and slogans refering to the Castor resistance.