Difference between revisions of "Forsmark NPP" 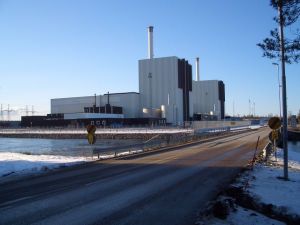 Forsmark is a Swedish nuclear power plant, located in the Uppsala region, east coast of Sweden (coordinates: 60°24′12″N 18°10′0″E) and operated by Vattenfall AB. Forsmark is one of the largest NPPs in the country and has 970 employees. It is also the site of the Swedish Final repository for radioactive operational waste.

Although Formark’s representatives claim that safety is their priority Number 1 and they work on making nuclear power safer, an accident on 2006 was an excellent example that showed nuclear power’s true face – ugly and scaring.

On 25 July 2006, Forsmark 1 reactor was shut down after an electrical fault. The incident was caused by an external electrical fault that triggered a short circuit of the switchgear. Two of the four back-up diesel generators did not start up as expected.[3] According to Lars-Olov Höglund, nuclear expert and former boss at Forsmark, the Forsmark incident was the most dangerous international nuclear incident since Chernobyl. “It was pure luck that there was not a meltdown,” he said, while Ingvar Berglund, Head of Safety at Forsmark, said there wasn’t a risk of a Chernobyl-like accident.[4] This incident was rated as Level 2 or “Incident” on the IAEA’s International Nuclear Event Scale (INES). Events are classified according to seven levels: the upper levels (4-7) are termed “accidents” and the lower levels (1-3) are called “incidents.” The event that occurred at Forsmark was rated as an incident without consequences to people or to the surrounding environment.[5]

Few months later, on February 2007, Forsmark was shut down again to inspect a rubber seal in one of the safety systems. On Forsmark 1 this seal needed to be replaced, Unit 2 was cleared by the regulator SKI (The Swedish Nuclear Power Inspectorate) and was free to restart.[6]

Today, Forsmark is still in operation.