Difference between revisions of "Solidarity with the persecuted groups in Russia" 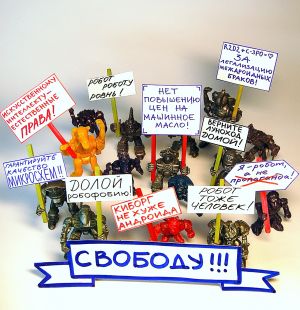 This was the cover of the "Youth Human Rights newspaper", which has been used for persecution of GDM as so-called "foreign agents"

Two solidarity campaigns have been started to support NGOs affected by the latest persecution under the "foreign agent" law in Russia. In Germany a campaign informs about the repression and political background, collects donations for the affected groups, spreads the word about concrete cases and activates groups to express their solidarity. Currently they focus on the persecution of "Humanistic Youth Movement" (GDM) and the already as "foreign agent" declared "Ecodefense". Additionally an international solidarity campaign has been initiated by anti-nuclear activists demanding Ecodefense's acquittal of the "foreign agent" stigmatization in a multi-lingual appeal.

Since some time progressive Russian groups and activists are under oppression by the state's authorities[1]. With the "foreign agent" and "extremism"[2] laws instruments have been created to suppress and eliminate organizations and movements being critical to the state, but also any others bothering the political powers[3][2][4][5]. In this context legal organizations de facto get prohibited if they are classified "foreign agents", because under these circumstances the continuation of work is almost impossible. With vague accusations of extremism even individuals who made critical statements were threatened with perennial imprisonment and virtually vanished into thin air. Environmental and human rights groups as well as other progressive organizations shall be stigmatized spies[6] and discredited publicly[1].

In the United States of America a similar law[7] exists enacted 1938 as a measure against Third Reich propagandists. The description of elements of an offense, registration enforcement and threat of imprisonment sound similar. To date in the USA this regulation originally declared an anti-Nazi law is still in force. Later the law was amended several times, and used for instance for the anti-Cuba policy of the US government.[8] In Russia in 2012[9][10][11][12] this idea was copied[13][14], but is directed primarily not against Nazis, but against any kind of political active organizations and their activists.[15]

However, relevant differences speak against justifying the Russian persecution of NGOs as "foreign agents" with the US "Foreign Agents Registration Act" (FARA), as the Russian government[13] does in public. While the US law aims basically on individuals[7] (and in this connection explicitly on foreign citizens[7][13])[8] becoming active inside the United States, the Russian law exclusively has Russian non-governmental organizations[10][12][13] in the focus. Thus, it is about the oppression of domestic engagement of their "own" citizens respectively their organizations. Scientific, religious, artistic and humanitarian activities in the USA are not targeted by FARA[8] - in contrast, in Russia organizations from those fields are definitely in the focus of the "foreign agent" legislation[13][14], and humanitarian NGOs actually experience this persecution systematicly. Besides, the term of a "foreign agent" has a quite different meaning in the two countries. While in English linguistic usage the word "agent" doesn't aim that much on espionage, but means representatives of certain interests (e.g. commercial agent etc.), in the Russian discourse it means foreign spies[10][14] linking to a term formed in Cold War propaganda[14], and according to polls a majority of the population[10] still understands it this way. Whereas in the USA "foreign agents" are simply people acting in the interest of foreign bodies, in Russia the word in recognized in military sense as "foreign spy"[13]. Apparently, no organization whose work is addressing the general public and which wants to practise enlightenment, can actually exist with such label[10][12][14].

Organizations engaging for the protection of human rights were one of the main targets of the "foreign agent" legislation[16]. The law had been created after the protests against irregularities during the Russian presidential elections in March 2012[10], where election observation NGOs had accompanied the process critically and indicated manipulations[6][17][15]. The Russian president Vladimir Putin imputed the strong protest movement to be initiated by the West. Before the introduction of the "foreign agent" law he already had initiated a drastic aggravation of the right to demonstrate.[15]

"The Free Dictionary" explains "foreign agent" as "(military) a secret agent hired by a state to obtain information about its enemies or by a business to obtain industrial secrets from competitors". "Spy" and "undercover agent" are offered as synonyms.[18] According to the Russian definition "foreign agents" are non-governmental organizations (NGOs) receiving sponsorship or other support from abroad[19][6] and being politically active[20][21][15]. Due to the political situation in Russia and the financial precarious circumstances of many people there, it is obvious that political independent work without support from groups and activists in other countries is difficult. Thus, many, maybe post of these politically independent, critical organizations in Russia are threatened by the "foreign agent" law.[22][13]

Already in connection to the first reading of the draft of law in State Duma in July 2012 oppositional parties protested in the parliament as well as non-governmental organizations outside the building. There was also criticism against the law[13] by Tatyana Morshchakova, one of the authors of the Russian constitution, and by the Kremlin's advisory Human Rights Council. Russian human rights organizations consider the law illegitimate and in contradiction with the basic rights[23] guaranteed by the Russian constitution[10]. In the Russian lower house it had been supported already by a majority of the representatives. The governmental party "United Russia" ruling a majority in the parliament had introduced the proposal for the law. Official it is supposed to prevent foreign states to impact the Russian home affairs.[15][10][13]

Practically, a treatment for "foreign agent" activity means that a NGO will be requested to register as foreign agent[24][15]. This can be done also on one's own initiative[10], but due to the consequences hardly any organization registers itself as "foreign agent". If the groups don't want to be labelled "spy"[25][1], a fine (up to 500,000 ruble[10][26] - more than 10,000 EUR - for the organization, and up to 300,000 ruble - more than 6,000 EUR - for the executive director[26]) impends NGO and representatives or even jail (up to four years imprisonment[10] in case of refusing to pay the fine). The organization then can be registered by the authorities by force. Most of the NGOs close after that[14], because a continuation of work after such classification is almost impossible: they are then subject of massive control[10], in publications they have to disclose as "foreign agent"[14][27], it becomes difficult to rent venues for events, they are stigmatized as spies in the public perception[10], and any other NGO cooperating with a "foreign agent" runs the risk of being classified as such, too. However, to "work in the underground" doesn't make sense for a legal NGO.[22]

To reduce the risk of more and more organizations being targeted with "foreign agent" cases in accelerated procedures, there is a unuttered consensus between Russian NGOs to go through with the whole procedure to the ultimate instance as the chances against a once started process of being classified "foreign agent" is virtually zero. Otherwise the repression bodies could come to mind to simply copiously threaten unwanted groups hoping then they would just close themselves to save efforts. A procedure brought through all instances in addition holds the chance to bring the case to the European Court of Human Rights.

Since Putin's signature under the amendment to the "foreign agent" legislation on 4th of June 2014 the Russian Ministry of Justice is authorized to declare NGOs foreign agents in their sole discretion[28][21] without the need for a trial before. This will probably lead to a rapid growth of the Russian "foreign agent" register[28] - at the time still only one organization is listed there[21]: the NGO "Promoting Competition in the CIS"[28]. All other organizations concerned had closed after that stigmatization and sometimes founded new NGOs. Indeed with this amendment the high fines should disappear, if the procedure to declare an organization "foreign agent" would be bypassed. But it seems the amendment created new reasons, and the Ministry was empowered "to impose fines on defiant NGOs"[21].

Handling of the foreign agent legislation in Russia

In Russia the strategy of most NGOs so far is to declare their activities not to be political, as they interpret it would mean party-related work or politics[1]. But then the law is phrased quite open[14][29] and mentions "any political activities"[30]. There have been criticism in Russia on the deliberated strategy of the NGOs and voices stressing a mutual radical objection of the law as a whole to be necessary. Currently, the resistance against it is mostly defensive, and eventually the Russian courts define themselves how they understand "political activities".[22] In April 2014 the Constitutional Court of Russia finally gave its blessing to the regulation - and stated any activity on the street would be political[1]. In March Putin announced a tightening of the legislation[31], which came into effect with his signature under a new law on 4th of June 2014[28].