Call for solidarity with the Russian environmental organization Ecodefense 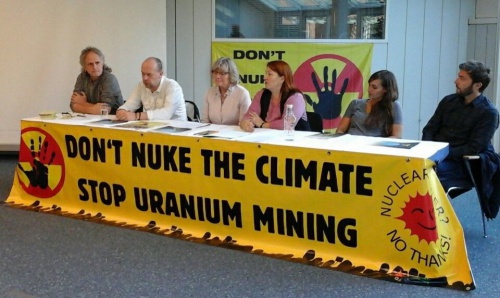 In July 2014, the Russian Ministry of Justice declared the environmental organization Ecodefense as so called foreign agents. After successful international protests - for example, uranium transports from the Westphalian town of Gronau to various interim storage facilities in the open air at Russian sites could be stopped, the construction of a nuclear power plant in the Kaliningrad exclave was prevented and along with South-African activists, Ecodefense played a key-role in halting the scheme to build 8 Russian nuclear reactors in South Africa - the Russian judiciary used this undemocratic instrument.

Since then, the non-governmental organization (NGO) must be observed more closely and additionally monitored. Ecodefense defends itself against the allegations of the Russian Ministry of Justice and emphasizes its independence. So far, several penal orders have been issued against the NGO, which Ecodefense has not obeyed. A personal penalty order against the director of the NGO was obeyed, the consequence was made in order not to suspend the director personally to the pressure of state power.

In the first week of February 2019, the Ministry of Justice escalated the situation: three more personally addressed punitive orders were sent and another two million rubles (about 28,000 euros) in two fines against the NGO, and Ecodefense's account was frozen.

Ecodefense is a member of the Climate Action Network and, like the Bürgerinitiative Umweltschutz Lüchow-Dannenberg, participates critically in the global climate conferences in the alliance Don‘t Nuke The Climate. Since 2007, BI members and directors have known and appreciated the professionalism of the independent environmental organization Ecodefense, which works to protect the population from environmental damage and contributes to environmental education and information.

In view of intensified repression against Ecodefense, we are calling for international organizations and people to solidarity. This petition can and should be signed, shared and everyone is encouraged to write own reports on what is happening:

The petition signatures will be handed over to Federal Environmental Minister Svenja Schulze in mid-March, with the urgent request to hand in the signed petitions to the Russian Minister of Justice, Alexander Konowalow, and claim that Russian authorities also pledge to comply with international human rights conventions with Russian environmental organizations.