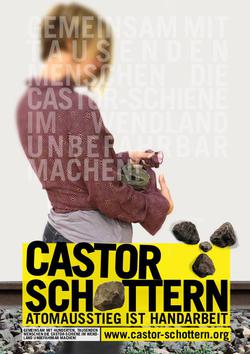 We call on those people who for many years have been active in the resistance against nuclear power; and the Castor-transports; on those who have demonstrated en masse against the governmentʼs savage cuts to social services; on the tens of thousands who have sat down on the street in order to stand up to the Nazis; on people in villages, in smaller and bigger towns and cities, who are no longer willing to accept governments and corporations riding roughshod over our opposition to nuclear power:

This year, together with you and hundreds, thousands of people, we intend to stop the Castor by taking out stones from under the train tracks, thus undermining them and making the railroad running to Gorleben unusable.

Enough is enough – together, weʼll stop this train

In November this year, yet another train will be transporting highly radioactive nuclear waste to Gorleben. Over the last decades, hundreds of thousands of people have over and over again demonstrated their ʻNO!ʼ to nuclear power in many different ways. There is still no nuclear waste dump, and countless accidents in nuclear power plants have once again highlighted the enormous dangers of relying on nuclear energy.

Together with hundreds, thousands of people from different political and societal backgrounds, we are going to get onto the train tracks on the day the train is supposed to run there. We are determined to make the tracks unusable for the nuclear waste train, to en masse remove the stones from under the tracks, i.e. to undermine them and to make them impassable in creative ways. We will choose one section of the tracks for this action, where, on this day, no trains other than the Castor are scheduled to be running.

Itʼs all said and done: our action is legitimate

We know that our conscious interference with the Castorʼs route is not covered by the law. Still, our actions are necessary and legitimate in order to shut down this dangerous and inhuman technology. With our ʻTrainstopping!ʼ action, we want to pull the rug out from under the nuclear lobby, making it impossible for them to ferry their waste through the country against the will of the people. There will be no “more of the same!”. We will shut them down.

Together and en masse

During the action we will create a situation that is transparent for everyone involved, and where those participating in the action watch out for and support each other in a spirit of solidarity. In order to get to the tracks, we will together overcome, go around or flow through police barriers. We will not be stopped. The goal of our action is to make the tracks unusable, not to attack the police. Our most important protection is our numbers, our diversity, and our determination: while hundreds or thousands will be removing the stones themselves, others will support them through the use of protective materials like air mattresses, cushions or tarps to shield them from repression. We will stay on the tracks until we have made them unusable.

This campaign is the result of the coming-together of groups and individuals from the anti-nuclear movement, the climate movement, alterglobalisation networks, anti-fascist contexts, from different areas of the left and wider society. We want to contribute our experiences from the successful mass blockades of the G8 in Heiligendamm, and of Nazi marches or events in Jena, Cologne and Dresden to the diverse and colourful struggles in the Wendland. We stand in solidarity with all other forms of protest and resistance against the Castor-transport.

Everyone can join! But what can everyone do?

In order for our action to succeed, we will have to be many.

You can announce that youʼll take part in Trainstopping! You/your group can support the action with your name/s.

You can form local groups and together prepare for the action. We will create resource to organise action trainings. Let us know if we can help. You can organise local events. We will be happy to come to you, tell you about the Castor, nuclear power and our plans to stop the train.

Letʼs shut down nuclear power. After all, someoneʼs gotta do it…