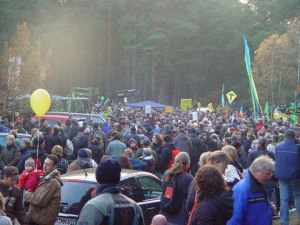 Thousands Of People Protesting Against Nuclear Power In Gorleben 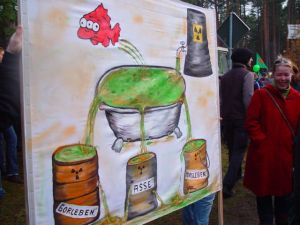 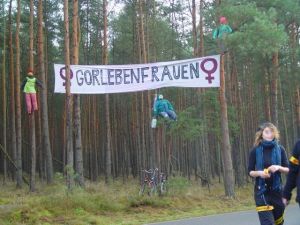 16 000 Gather to protest against Castor

8 November - A crowd of 16 000 people demonstrated against the Castor transport in Gorleben today, marching through the town and eventually settling just outside of it, near to the gates of the "Zwischenlager" - the temporary nuclear waste disposal site (also located in Gorleben) - to listen to speeches and music. Madsen, a very popular band, ended the event to a very lively and dance-happy crowd.

The protesters were accompanied by at least 400 tractors - a powerful testament to the sense of solidarity that exists around the issue of nuclear power and nuclear waste in this region. Gorleben is the 'ground zero' of the nuclear waste issue in Germany - it is the site of an old mine that the German government is hoping to turn into a permanent nuclear waste disposal site. For decades, the local people in and around Gorleben have been welcoming outside activists onto their land and into their homes, to help strengthen a movement whose aim is to force the German government and the nuclear industry to take responsibility for their decisions to propagate a dangerous and unnecessary power source.

The subject of nuclear waste disposal is a central one in Germany right now, and the anti-nuclear movement is arguably the strongest social movement in the country, with a histroy of public disobedience stretching back into the 1970s.

The rally in Gorleben was a family-friendly continuation of this tradition. Police presence was very pronounced, with police officers from around Germany, each with their own specific uniform, placed along the entire route of the procession. Upon arriving at its destination, the crowd found itself still surrounded by police - although in general the troops stayed outside of the festivities, watching the thousands from the sidelines, and patroling in the nearby forest rather than walking through the dense crowd.

The march began at 13:00, and began to dissipate soon after dark. As young families began to pull their children past the lines of officers, however, around 500 people stayed behind to blockade the main gate of the Zwischenlager. It is at this gate that the Castor transport will unload its toxic and radioactive cargo.

This action was organized beforehand by "X-tausendmal quer" - a non-violent action group focusing on the nuclear issue. The crowd of blockaders was supported by tractors, and a loud soundsystem played local radio reports of the action to the people sitting on the road. Over the course of the evening, the number of police patroling the blockade steadily increased, and special supply cars carrying riot gear, floodlights, and surveillance cameras also arrived.

As of late Saturday night, police had not attempted to remove the blockade. Organizers and activists do not expect police to make any attempt to do so until the Castor transport is nearer to its destination. This kind of delayed reaction makes it unlikely that participants will be available to blockade the gate as the Castor transport arrives. Blockaders will probably be removed from the area just before its arrival, so that the police can keep them in custody until the transfer of the waste is completed.