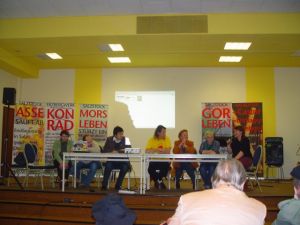 Podium with some activists from several countries supporting the Castor resistance 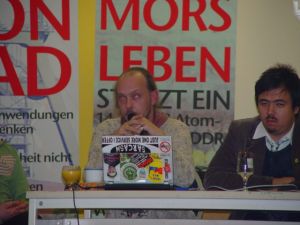 Warm socks for the international activists...

On Friday, 7th December international guests from around the world were welcomed in the Wendland through an information event in Dannenberg with the title „Nuclear Companies Deal World Wide – Our Resistance is International, Connected, and Knows No Borders“. Attendees from countries like France, the Netherlands, the United Kingdom, Russia, Finland, the United States and Canada participate in the resistance against the Castor transport (high level radioactive material) to Gorleben in the „Wendland“ (Lower Saxony). Some of them told about the situation in their countries. The event was supported with music from a Berlin band „Nümmes Straßenrock“.

Activists from Canada, Finland, the Netherlands, and Russia spoke about nuclear power in their countries and about the national and local resistance against its use. In all of these countries the anti-nuclear movement is quite active and rising. In Russia, Finland, and Canada the nuclear industry, as well as government, would like to build new reactors.

The French activists couldn't take part in this event for two reasons: one of them was ill, the other one was arrested by the German police! She took part in a blockade action against the Castor transport on 6th November in the Wendland, together with other activists. Police arrested her and want to keep her in jail until the transport arrives in Dannenberg (Wendland). She is well known for her creative resistance (especially climbing actions) and there are suspicions that she was arrested due to specific targetting by the German police forces. Police likely want to prevent her from carrying out any actions during the Castor transport, which will be in Germany from 7th November through to the 10th November. It is strongly unlikely that this imprisonment is legal.

The information event was also a memorial service to Sébastian Briat who was killed by the Castor train 2004 in France near Avricourt (by Nancy). Sebastian's passing remains a very sensitive issue among Castor protestors. The information evening was a powerful testament to the strength of a movement that has been dealt a hard blow but continues to fight on.

With a theater insertion, music, and further information about the current actions against the Castor transport, the event came to its conclusion. Warm socks were given to the international supporters for resisting the Castor and to say keep on their fight against nuclear power. Tomorrow, there will be a large demonstration in Gorleben, which will be supported by more activists from different countries.