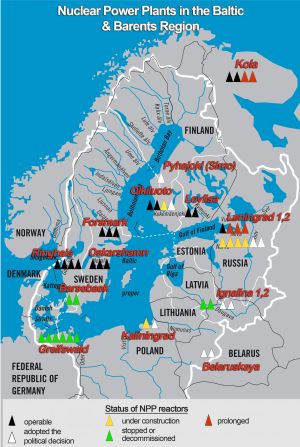 Over the past forty years, 32 nuclear power plants (NPP) have been constructed and operated in the Baltic and Barents regions. Taking into account their operating experience, all countries of the Baltic region have got divided into two groups: nuclear optimists and nuclear pessimists. Thus for safety reasons, the countries located in the west of the Baltic region either refused construction of the new nuclear power plants (Denmark) or started decommission process of the existing power units (Germany, Sweden, Lithuania). At the same time, the countries in the east of the region either extend the service life of their old NPPs (Russia) or build the new nuclear plants (Finland and Russia). The new NPP construction projects are being most actively promoted exactly along the border of division between the nuclear optimists and the nuclear pessimists.

Lithuania, Russia and Belarus in the southern part of the region make plans to construct three new NPPs in about 150 km radius, two power units by each country. It should be also mentioned that one out of two power units in each NPP is intended for export of nuclear power to the neighbouring states. At the same time, those who are supposed to import the nuclear power have no access to the information about NPPs in the neighbouring countries, and, consequently, can say little about safety of the whole project. Furthermore, no word has been said about responsibilities of the importing and exporting countries for radioactive waste and spent nuclear fuel. We should remember that the export of nuclear power is equal to the import of dangerous radioactive waste into a producer country.

When it comes to the nuclear power projects, the International ”Convention on Environmental Impact Assessment in a Transboundary Context” (Espoo Convention) does not really work as an effective instrument for coordination of ecological safety in the region. Russia has signed but not ratified the Espoo Convention. Belarus has ratified the Espoo Convention but not ensured that it is implemented. Andrey Ozharovskiy, the expert representing the environmental interest group of Russia, once tried to take part in the public hearings on Belarus nuclear power plant, but was arrested and spent a week in the prison of Belarus.

In Russia the public participation is used as a manipulation tool for promotion of the nuclear projects. In order to link their actions to the public participation, the nuclear industry companies use non-governmental organizations (NGO) which are in fact established or controlled by representatives of those companies. These NGOs enjoy a privileged access to the environmental impact assessments of the new NPP projects. As a result, only positive reviews of the public evaluation are released to a wide audience. Afterwards these reviews are used to seek financing for NPP building from the federal budget of Russia. However, people, who live nearby the proposed construction sites of new power units, do not trust these “positive reviews” and they have no opportunity to take part in the relevant decisions.

”No Adverse Environmental Impact” was the title of the expert review based on the environmental impact assessment of the new Leningrad NPP-2 located near Saint Petersburg[1]. The review was published by Environmental Movement of Concrete Actions, the Moscow NGO headed by the director's adviser of Rosatom (Russian Atom). Five thousand citizens of Sosnovy Bor including the representatives of the nuclear industry entities based in this city expressed incredulity at this review. They signed the petition to the President of Russia with a claim to stop building of the Leningrad NPP-2 and to modify this dangerous project.

There is another problem that seriously harms the environmental security of the region. I mean the problem of safe storage of radioactive waste and spent nuclear fuel. Typically if the nuclear waste is transported from country to country inside or outside of the region, it is considered as a solution to the problem. Over the last 20 years, more than 100 thousand tons of depleted uranium hexafluoride was transported from Great Britain, France, and Germany through the Baltic Sea and Saint Petersburg to the Ural and Siberian regions of Russia. After the uranium enrichment the materials are transported back to Europe. However, about 90 % of the waste is stored in Russia for an indefinite period of time. At the same time, according to the Russian regulatory bodies, Russia does not meet the up-to-date safety requirements of the radioactive waste storage.

Some European countries support the transportation of the spent nuclear fuel from the old Soviet nuclear submarines and Kola NPP based in the Barents Sea basin to the Ural region of Russia. This is a dangerous and short-sighted policy. In the course of fuel reprocessing the amount of radioactive waste is increased thousandfold and a part of it gets directly into the environment. Thus, thousands of square kilometres of the Russian territory are contaminated with the radioactive substances as a result of 60-year work of Mayak, the enterprise in Chelyabinsk region specialized in producing of weapon-grade plutonium and reprocessing of spent nuclear fuel. The environment of this region as well as hundreds of thousands of people living there suffer from the activity of this enterprise. Moreover, while migrating of the radionuclides though aquatic ecosystems, the radioactive materials get into the Arctic Ocean via the Ob river and go back right to the Barents region, where they are transported from. Thus, it is by no means true that the transportation of spent nuclear fuel ensures the environmental security.

The cross-border effect of the “atom for peace” policy makes almost impossible for countries of the Baltic and Barents regions to maintain their national security. Both the ageing of existing NPPs and the growing number of new NPPs bring a serious threat to the whole region. This is not only the threat to the national security of each country in the region, but also to the renewable fishery resources of the Baltic Sea. We should keep in mind that the water ecosystems of the Baltic Sea are very vulnerable and water exchange with the mid-ocean is not significant. Already today the Baltic Sea is considered as the most radioactively polluted sea in the world.

However, it is still possible to enhance the ecological safety of the region. What we need is a set of common safety standards and an effective mechanism for public participation in consideration of the new nuclear projects. I propose the following measures to be taken: