OREPA’s cost estimate, based on the cost of the bomb plant design through FY2016, reveals the current assurances of Senator Lamar Alexander (R-TN) and the National Nuclear Security Administration to be deceptively erroneous.

“They are lowballing the actual cost of the project,” charged OREPA coordinator Ralph Hutchison. “And they are withholding information from the public about the money they have already spent. They know there is no way in the world they will build the UPF for $6.5 billion, even though they’ve scaled back the project and shifted major pieces to other lines in the budget. Still the UPF is on a trajectory to cost more than ten billion dollars.”

OREPA’s calculations, explained in the September 2015 UPF Update, are based on the simple calculation of total project cost from the cost of design.

“Our number is actually conservative,” said Hutchison. “We are cutting them slack because the UPF is a complicated project. And we’re not counting the first half billion dollars plus they spent on their first two designs.”

By the end of FY 2016 (September 30, 2016) the UPF bomb plant design team will have spent more than one billion dollars on the current design (since November 2013). The industry standard for calculating design cost as a fraction of total project cost is 3.5%; for complex projects, it can be as high as 6.5%.

“We’re saying the UPF design may be 10% of the total cost—which means the whole thing will cost over $10 billion. If they come in closer to the industry standard, the total cost will be even higher. And the longer they take, the more it will cost.”

The Uranium Processing Facility has been plagued by mismanagement, runaway cost projections, and schedules that recede toward infinity. It continues, year after year, to be listed on the Government Accountability Office’s “High Risk Projects” list.

Despite the problems, the UPF continues to receive hundreds of millions of dollars in the budget. Rather than be accountable to the public for the money it is spending, the UPF project managers and contractor representatives hold secret meetings with Senator Alexander, chair of the Senate Energy and Water Appropriations Subcommittee. The subcommittee holds the purse strings for the UPF.

The NNSA has declined to provide any numbers or cost projections related to the UPF, saying it will wait until the design is 90% complete before hazarding a guess about the total cost.

OREPA also wrote to Senator Alexander on Friday, September 4, demanding accountability for the money spent so far on the UPF design. “We still live in a democracy,” Hutchison said, “Even here in Tennessee. In a democracy, taxpayers have a right to know where their money is going. And the government has a duty to disclose.” 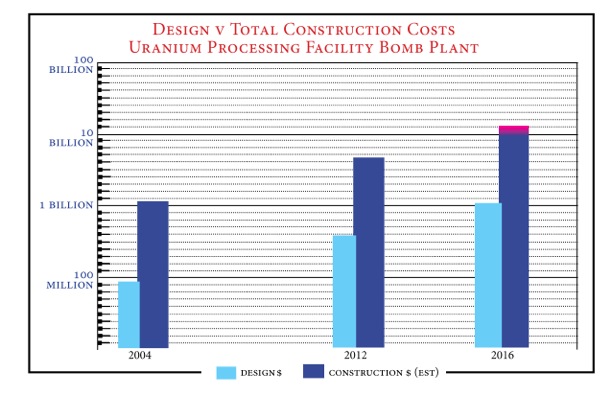 The Oak Ridge Environmental Peace Alliance works to stop nuclear weapons production at the Y - 12 Nuclear Weapons Complex in Oak Ridge, Tennessee. This is a tightly moderated list which includes a wide range of members from across the country. It is strictly limited to matters of concern to OREPA and its work to abolish nuclear weapons.