In the 1970s, an anti-nuclear movement in France, consisting of citizens' groups and political action committees, emerged. There were many large anti-nuclear protests and demonstrations. More recently, targeted campaigns have been conducted, mainly by Greenpeace, and Sortir du nucléaire (France) has called for an official safety inspection of Areva facilities.

Between 1956 and 2002 about 60 nuclear plants have been taken into operation in France. The first research reactor for electricity generation was built in Marcoule by the Commissariat à l'énergie atomique (CEA). Some 58 commercial nuclear reactors are in operation in France these days. Besides these reactors, France has established a big number of all types of atomic plants to produce nuclear fuel and treat radioactive material for the commercial use. Some 80 % of electricity produced in the country comes from nuclear power stations.

Until the event of the Fukushima disaster there was a wide pro-nuclear consensus between all political parties expect for the Greens. In 2011 the situation changed a bit with the Socialists questioning their stance. During the last dozen years the anti-nuclear movement in France became stronger and stronger. The Réseau Sortir du Nucléaire as an association of about 600 groups and organizations was founded connecting and supporting anti-nuclear activities in France centrally. Blockades and mass demonstrations have formed the picture of the anti-nuclear movement since that time.

The supposed final disposal site for high level atomic waste is situated in the area of the village of Bure. An underground laboratory is preparing the later operation of the repository although doubts of the suitability of the sire have not been cleared. A protest house was bought in Bure by the movement as a gathering place and for educating and campaigning against the Bure final disposal plans.

A second prototype of the EPR was started in Flamanville some years after the construction begin in Finland as the Olkiluoto III project experienced too many difficulties to get finished soon. These days a main field of protests against nuclear power developments in France is the construction of new power lines. Construction site occupations took place as well as public campaigns, camps and other events. The transports of the high level CASTOR containers from the La Hague reprocessing unit to Gorleben in Germany were also cause for hundreds of French activists to demonstrate their protest, blockade the transport and to show solidarity with the anti-nuclear protests in Germany.

France began a nuclear power program in the 1950s and announced a shift to the Westinghouse light water reactor in 1969. Following the 1973 oil crisis, the government announced a dramatic increase in planned nuclear capacity. These major decisions were put forward as a fait accompli, with no opportunity for meaningful parliamentary debate.[1] An intense extra-parliamentary opposition, of citizens' groups and political action committees, emerged. In the 1970s, there were many large and dramatic anti-nuclear protests and demonstrations in France.[1]

In 1971, 15,000 people demonstrated against French plans to locate the first light -water reactor power plant in Bugey. This was the first of a series of mass protests organized at nearly every planned nuclear site until the massive demonstration at the Superphénix breeder reactor in Creys-Malvillein in 1977 culminated in violence.[2]

Vital Michalon died on the demonstration, he was hidden by a police weapon [3]. 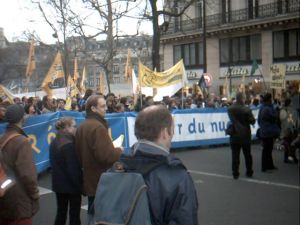 In January 2004 thousands participated on a protest action in Paris against the EPR.

In 2004, an anti-nuclear protester was run over by a train carrying radioactive waste.[4] In 2005, thousands of anti-nuclear demonstrators marched to commemorate the 1986 Chernobyl disaster and demand an end to government plans to build a nuclear plant in western France.[5]

In 2008, twenty Greenpeace activists delayed construction of a new nuclear reactor being built in Flamanville for 50 hours.[6] In July 2008 there were a series of accidents at the French nuclear site Tricastin-Pierrelatte, and Greenpeace France launched two court cases in an effort to find out more details about these.[7] In August 2008, Sortir du nucléaire called Areva's radioactive emissions 'very dangerous' and sought an official safety inspection of its factories.[8]