Castor Resistance 2008 - Blockades On The Tracks By Harlingen 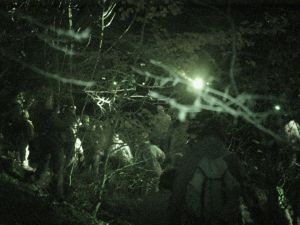 People trying to reach the tracks 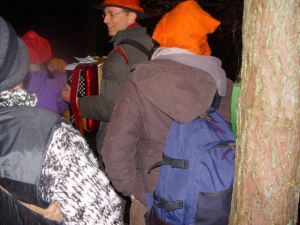 music accompanies people making a run for the railbed 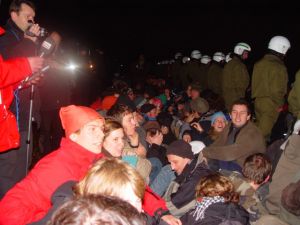 activists are successful in blockading the tracks near Harlingen 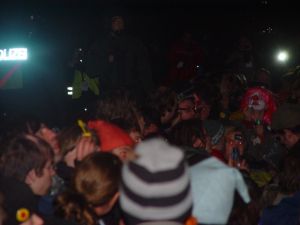 the atmosphere was relaxed at first with some participants blowing bubbles

Castor: Blockades on the Tracks by Harlingen

While the Castor transport takes more time than expected to arrive at its destination - because of a blockade with three people who were locked-on at a concrete block at the French-German border - several blockades of hundreds of people sitting on the tracks took place in the region of Harlingen tonight. Even huge amounts of police forces with tanks, water canons, hundreds of police officers and special supply couldn't prevent people coming on the railway. This is a report from one of those blockades near Harlingen.

At Kilometer 187,9 a blockade of what police estimated to be about 138 people sat on the tracks. Some minutes before, in the same region, at least two other blockades like this one happened. Hundreds of people were walking through the forests, showing their presence to the police, shouting, trying to reach the railway and so on. Hundreds of police officers tried to protect the tracks from being walked on and sart on by activists. But police couldn't prevent everything because there were too many people, and the railway is long and can't be protected completely.

An activist described how he and some others managed to reach the tracks. He said that people in the crowd made several atempts to get onto the railway with the intent to sit on it and blockade, and somehow they finally succeeded. At first the police tried to stop the steady stream of people who had found a weak point in the police lines protecting the railbed, but once several people had already succeeded in sitting on the tracks, the police stopped trying so hard to stop them. The situation among the blockaders seemed to be relaxed and without trouble. However, once the blockaders were settled in, the police very resolutely denied anyone who wanted to join or support the blockaders, access to the railbed.

Many people in the blockade declared their action to be non-violent and promised they wouldn't cause conflicts if police wouldn't give a reason for it. The officer in charge of handling the action spoke in a nearly ridiculous-sounding way to the blockaders and wanted them to leave the railway. He gave three announcements that this blockade is against the law and they had to go and announced that otherwise police would remove them from the tracks. He said he could say people "have to go" but wanted to beg them to do it. Later he said that this wouldn't be an order but a beg. He created the impression that police would be friendly and only wants the best for the activists (they could be hurt by being transported from the wet and slippery tracks).

The first blockaders were taken away carefully after being asked if they wanted to go voluntarily. Later more and more aggressive police officers could be seen, twisting the hands of some activists and making them scream. At least one activist could be watched when a police officer again and again tried to grab his testicles and to cause pain on him. Not every police officer was this brutal but their were many blockaders who were dragged over the gravel, some carried headfirst and many screaming because of pain caused by police grips. Obviously, the nice and friendly words of the police chief were untrue. They used violence against people to achieve their aims if they wanted to, without regard to peoples' health.

After this blockade was removed by the police there were new attempts on other places.