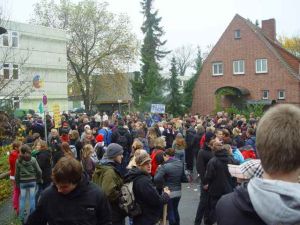 Hundreds of students protesting in Lüchow against the Castor transport 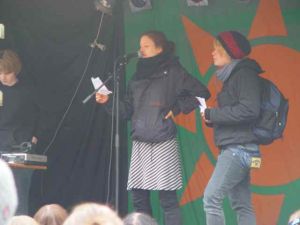 A lively and energetic speech from two student organizers

On 7th November hundreds of protesters took to the streets of the town of Lüchow, Germany today to protest the transport of nuclear waste into the Wendland region. Their march was also in memorial of Sebastian Briaut, the French man who died while protesting the Castor transport in 2004.

After the hour-long march, tensions rose as the crowd approached the road leading to the local police barracks. As student organizers encouraged those attending the 'official demonstration' to return to it, around 150 people left the official march, which organizers had planned to have turn back at the roundabout at the Saaßer Chaussee towards the center of Lüchow. This 150 instead decided to continue on, walking down Salzwedeler Landstraße, toward the police barracks.

There were several altercations. Eggs were thrown towards the police. Eggs hold a special significance at the students' demonstration, because at the last Castor transport, the police were very heavy-handed with young protesters. This year's resurrection of the egg-throwing tradition showed that resistance will not stop in the face of repression against students.