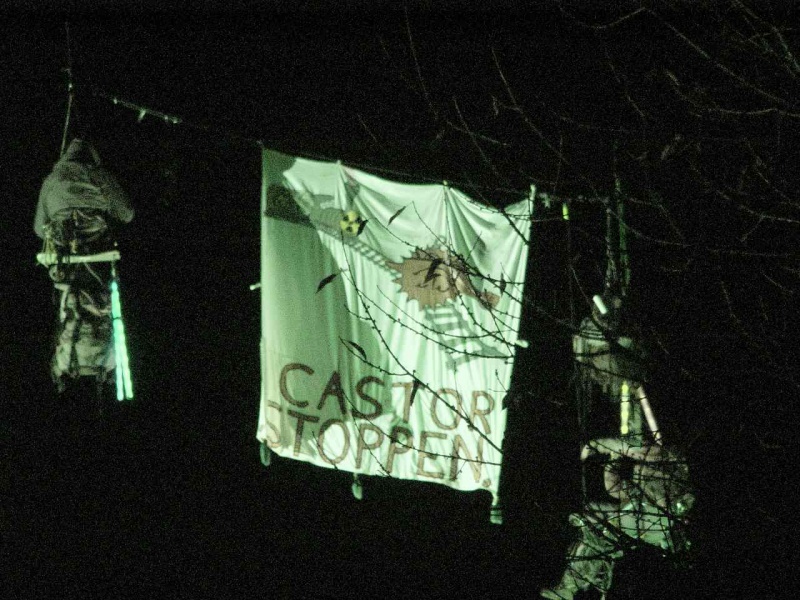 Two activists abseiled down the about 70 meters high Fulda valley bridge in Morschen close to Kassel, a high speed train bridge crossing the railway tracks the Castor used. They were hanging some meters above the ground with a banner saying "Castor stoppen" (stop the Castor). Some supporters on the bridge were guaranteeing there safety against dangerous actions of the police or to help them if the climbing activists would have wanted to climb upwards again.

On the ground another action of some 50 activists was blockading the tracks nearby the bridge. They had spread over a wider area and made noise and lights from time to time to confuse the police.

This double-action stopped the Castor for approximately 2 hours. The police first didn't try to get down the activists. The head of operations of the police was obviously fighting hard with himself wether or not to send the high level radioactive waste transport underneath the climbing action risking the protesters' lifes. Finally he decided to do it although the activists were protesting. The police told them that it would be dangerous for them because of the rain and the high voltage lines above the tracks. Anyway, this wouldn't stop them from putting through the transport in this place. Afterwards, when the Castor transport had passed the climbing action, the police ordered a special train to get the climbers to the ground.

The two climbers and there three safety supporters were arrested first. Four of them were released soon afterwards, the fifth person was kept by the police longer. The fifty activists on the ground were finally surrounded by police until the train passed the area. There identity was established and pictures of them were taken. Then they were released without additional arrest.

Climbing activists with a banner at the Fulda valley bridge above the Castor tracks close to Morschen (Kassel).

The following 3 pages use this file: