Astravyets/Ostrovets NPP is located in the Grodno region.[2]

In most commercial sources the nuclear power plant is referred to as "Ostrovets NPP" which is the Russian name. As the site is actually located in Belarus we will use the Belarusian name of the area which is Astravyets.[3] 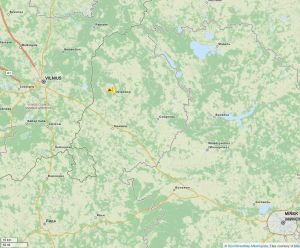 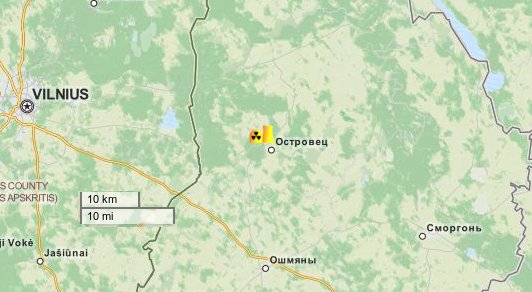 Russia's AtomEnergoMash (AEM) will supply the reactor pressure vessels, reactor internals, and core catchers for two VVER-1200 units that are to be built as part of Belarus' first nuclear power plant at Astravyets. In total AEM noted that it will supply approximately 4,000 tonnes of components that will be manufactured at its Atommash plant in Volgodonsk and delivered to the Astravyets site over the period 2013-2017. The internal equipment includes upper blocks, reactor shafts and reflection shields. A $10 billion turnkey contract was finalised between Belarus and Russian state nuclear enterprise Rosatom in July 2012 for the supply of two Gidropress-designed AES-2006 model VVER-1200 pressurized water reactors. The main construction contract, however, was awarded to AtomStroyExport (ASE) back in October 2011 and site works are already underway, although first concrete has yet to be poured. Unit 1 is currently slated to begin operation in 2018 while unit 2 is due to follow in 2020. Rosatom has described the AES-2006 as its 'reference' design due to its deployment in China at Tianwan and current construction in Russia at Novovoronezh Phase II, Leningrad Phase II - as well as at the Baltic site in Kaliningrad. AEM noted that it has completed core catchers for the Novovoronezh and Baltic units, and is as of spring 2013 in the process of manufacturing further reactor components for the Baltic plant.[4]

In line with the document the Belarusian nuclear power plant will have two power-generating units with an installed nominal capacity of 1,194 MW each. The total capacity of the power plant will be 2,388 MW, the operating life will be 50 years, and the average annual electricity output in basic operation mode will be 17,095.1 million kWh. The resolution has also approved the architectural design of the Belarusian nuclear power plant (the list of expenses) with the preliminary estimated cost at RUB 44.582 billion in year 2001 prices, BYR 2.9 trillion in year 2006 prices, or $340.86 million.[5] The same project is being used in the Russian Federation for the construction of the Baltic NPP, Novovoronezh NPP-2 and Leningrad NPP-2. An analogous Tianwan NPP is already in operation in China.[2]

In June 2009 the Belarusian government announced that Atomstroyexport would be the general contractor, with Russian and Belarus subcontractors, notably St Petersburg Atomenergoproekt. An intergovernmental agreement concerning the plant was signed in March 2011. A preliminary turnkey construction contract with Atomstroyexport for a 2,400 MWe plant (2 x 1,200 MWe AES-2006 units using V-491 reactors) was signed in October 2011 by Belarus state-owned Nuclear Power Plant Construction Directorate, and a general construction contract was initialled in May 2012, then signed in July. St Petersburg AEP is reported to have been involved with the project since 2004, including site selection and technology choice.[6]

The operational start of the first unit of the Astravyets plant is scheduled for November 2018 and the second unit in July 2020 to supply 2,340 MWe.   In December 2011 the Nuclear Power Engineering Department of the Energy Ministry submitted an application for a construction license to state nuclear regulator Gosatomnadzor. During 2012 some site works were under way, and excavation for the second unit started in February 2013.[6]

Two further units are proposed for about five years later.[6]

Russia's policy for building nuclear power plants in non-nuclear weapons states is to deliver on a turnkey basis, including supply of all fuel and repatriation of used fuel for the life of the plant. The fuel is to be reprocessed in Russia and the separated wastes returned to the client country eventually.[6]

In June 2009 the government announced that US$ 9 billion Russian financing had been lined up, and in August 2009, the agreement on financing from 2010 was confirmed. "Active negotiations" continued, since Belarus wanted the Russian loan to include provision for infrastructure. Belarus' official cost estimate including infrastructure is US$ 9.4 billion, with one third of this to be spent 2011-15. In November 2011 it was agreed that Russia would lend up to $10 billion for 25 years to finance 90% of the contract between Atomstroyexport and the Belarus Directorate for Nuclear Power Plant Construction. In February 2012 Russian state-owned Vnesheconombank (VEB) and Belarusian commercial bank Belvnesheconombank signed an agreement needed to implement the Russian export credit facility. In May 2012 the parties confirmed that the first installment under the design contract would be $204 million, and that this would be followed by $285 million for pre-construction site works. In April 2013 Atomenergomash (AEM) won the tender to supply the two reactors, which will be manufactured by AEM-Technologies at the Atommash plant at Volgodonsk.[6]

According to a study by the German federal authority for radiation safety, Bundesamt für Strahlenschutz, the probability of leukaemia among children under five years age is the higher the closer their proximity is to a nuclear power plant. The analysis between 1980 and 2003 gathered statistical data about 1,592 children with cancer and 4,375 healthy children in 41 German districts in close proximity to 16 NPPs.[8]

"A conclusion is thus reached in the study that the nuclear power plant in that region bears the immediate culpability for 29 cancer cases, including 20 leukaemia cases among children under five who lived in its vicinity. According to data gathered by specialised clinics in the Gomel region – an area in Belarus that sustained some of the worst impact of radiation fallout following the Chernobyl disaster in 1986 – incidence of leukaemia in children and adults alike has increased by 50 percent after the notorious disaster compared to the rate that existed before the accident. The technological processes taking place at any NPP take as a given that the surrounding atmosphere will be systematically receiving radionuclide discharges – products of nuclear fission and activation, radioactive noble gases, radioactive iodine, and tritium (heavy hydrogen). For example, a nuclear reactor of the pressurised-water type – one of the more common reactor types employed in Russia such as a typical VVER-1000 operating in a design-basis mode and at its nominal capacity - will be responsible for as much as 20 terabecquerel worth of radioactive discharge emitted through its ventilation pipe system."[8]

In light of this data that highlights the known hazard of even smoothly operating nuclear power plants one is bound to question the moral underpinnings of the very practice that entitles NPPs to daily emit their dangerous radioactive discharges into the surrounding atmosphere. One would also expect to find an increased rate of cancer cases among children living near each of the 10 nuclear power plants in operation in Russia. The highest risk would be associated with NPPs located within less than five kilometres from the nearby population, such as in the town of Udoml, which is near the Kalinin NPP, to Moscow’s north. A significantly higher cancer incidence rate could also be predicted in the vicinity of nuclear power plants operating pressurised-tube reactors, or RBMKs, such as the Leningrad and Kursk NPPs, near St. Petersburg and the Southwest Russian city of Kursk, respectively.[8]

Belarus is a signatory to two international ecological treaties that have a direct bearing on the development of such projects as the nuclear power plant in Astravyets - the 1991 Espoo Convention on the Environmental Impact Assessment in a Transboundary Context and the United Nations Economic Commission for Europe’s Convention on Access to Information, Public Participation in Decision Making and Access to Justice in Environmental Matters, signed in the Danish city of Aarhus in 1998.

Critics of the future NPP - both among environmental organisations in neighbouring countries and at government level in Lithuania, which has repeatedly voiced its concern over the plans to build the site in such close proximity to its border – have pointed out a number of stark inconsistencies between the decisions and steps undertaken by Belarus in the Astravyets project.

Aside from transportation and other safety-related issues - such as that the resulting radioactive waste that Belarus will have to accept back after reprocessing will total up to 200 tonnes per every tonne of repatriated SNF - one pressing problem arises from the fact that no reprocessing facility capable of handling SNF generated in VVER-1200 reactors, the model slated for operation at Astravyets, exists or is even envisioned for construction in Russia, while storage facilities are filled to capacity.

In estimates done by Russian experts, SNF reprocessing services could cost Belarus over $3 billion in market prices over the entire period of operation of the new NPP in Astravyets.[12]