Quest for a final disposal site in Switzerland

Information About the Potential Siting for Nuclear Waste Repositories in Switzerland

The Swiss village Benken is located just a few kilometres from the Rhine Falls close to the border between Germany and Switzerland. From the point of view of the NAGRA (National Cooperative for the Disposal of Radioactive Waste), Benken is one of the preferred locations for a final repository for the high-level radioactive waste produced by the five nuclear power plants in Switzerland.

Besides Benken in the Zürcher Weinland, the regions of Bözberg and North Lägeren are candidates in the actual process of site selection for the high-level radioactive waste (HLW) repository. All three sites offer opalinus clay as host rock. For so-called low- and intermediate-level radioactive waste (L/ILW) the NAGRA considers Südranden, Jura-Südfuss and Wellenberg with the host rocks opalinus clay, Effingen beds, brown Jurassic rock and marl formations of the Helveticum, as well as the already mentioned regions considered for high-radioactive waste.

The NAGRA considers a possible combination of a nuclear disposal repository for high-level as well as low- and intermediate-level radioactive waste, for example in Benken. The Sectoral Plan process takes place in three stages and ends with the selection of one siting region for the high-level waste repository as well as one for the low- and intermediate-level radioactive waste repository or a combination of both in one nuclear repository. At the end of the Sectoral Plan process – estimated in the year 2017 – a referendum about the General License Application for a deep geological repository will be held. 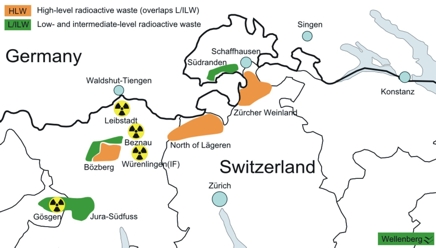 Due to their ongoing uplift the alps are not suitable for a nuclear repository. Therefore, the original concept of the NAGRA was a final repository in deep granite layers covered by sediments as a second safety barrier. But despite a cost-intensive search no suitable granite formation was found in Switzerland. Hence, the NAGRA brought up another host rock for the ideal nuclear repository. The sedimentary rock Opalinus Clay, a clay rock of the Middle Jurassic. Especially its self- sealing effect is praised by the NAGRA.

In 2008 the electric power companies Atel, Axpo and the BKW FMB Energie AG submitted General License Applications for three new nuclear power plants to the Federal Office of Energy (FOE). If the General License Applications are approved (as might be expected) by the Swiss Federal Council (Bundesrat) after an extensive procedure lasting approximately 4 years, the alliance „Stop Atom“ will seize a referendum for or against new nuclear power plants.

Download this text as a flyer (A4, 2 pages, 600dpi) in Italian German or English