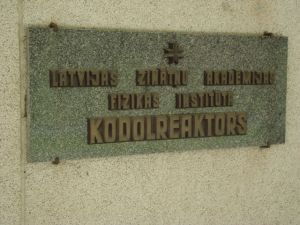 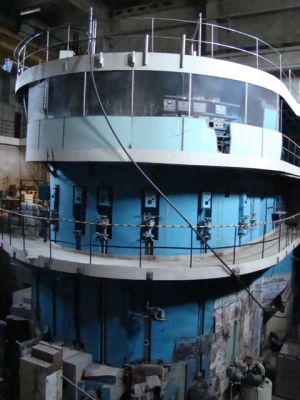 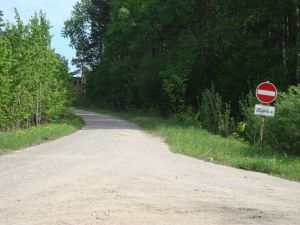 The road to the reactor

Salaspils Research Reactor (SRR) is located in Salaspils municipality, 2 km from the centre of Salaspils city, 25 km from Riga, the capital. It was the only civilian research reactor in the Baltic States[12]. Neutron activation analysis, nuclear reaction research, researches in solid state radiation physics, radiochemistry and radiobiology were carried out there. They were mainly done for scientific and medical purposes.

The estimated amount of radioactive waste the decommissioning of SRR will generate is 1200 m³.[14]

There was a small radioactive waste storage on the site of SRR (1975-2005) where some parts dismantled from the reactor core were stored after reconstruction activities in 1975. After characterisation and re-packing all waste was transferred to the radioactive waste repository „Radons“ in Baldone. The spent fuel was sent to Mayak in Russia in May 2008 within a bilateral governmental agreement.[15]

The story of Salaspils Research Reactor (SRR) starts in 1957 when Igors Kirko, the director of Institute of Physics of the Academy of Sciences, invited two academics to a meeting. His purpose was to make proposals for construction of large scientific objects in Latvia (then – Latvian Soviet Socialist Republic), which would be included in the plan for next seven years. One of the academics, Pēteris Prokofjevs, suggested to build a research reactor – he had recently visited an IRT-1000 reactor in Moscow and was deeply impressed.[16]

The proposal was sent to the Council of Ministers of the USSR who accepted it in spring 1958. Salaspils was chosen because it was claimed to meet the requirements the best. It was close to Riga, easily accessible from the capital, the site met requirements for construction of dangerous objects and earth there was not important for agricultural needs thus it could be used for the sanitary protection zone. Also Olaine, Baldone and Carnikava's polygon were named as potencial locations.

At first SRR was a regular construction site, but after a message for future generations was concreted in its foundation on May 27, 1960 in an official ceremony the government of Soviet Latvia proposed to turn SRR into a present from Latvian proletarians for the XXII Congress of the Communist Party of the Soviet Union in autumn 1961. The site became an object of high priority.

Construction of the reactor's pool was finished in spring 1961. Everything around the pool - walls, windows, floors – as well as the pool itself had to be cleaned otherwise all flecks of dust would become radioactive. It was done by the reactor's staff, who spent the whole summer cleaning. Cleaning was realized by joint works (also known as bees), which where mandatory and lasted a full working day – 8 hours. The most famous of them took place on April 22, 1961. Maybe because it was a Saturday 8 employees out of 37 did not attend the joint work at all, 7 later sneaked away.[17]

The first criticality took place on September 26, 1961 at 5.02 PM. After that the reactor was shut down and turned on again on October 9, 1961 when it was officially opened by both academics and government officials.

Blueprints and other documentation for SRR project were received from Kurchatov Nuclear Power Institute in Moscow, which offered to increase the reactor's nominal thermal power to 2 MW. This proposal was accepted by the presidium of the Academy of Sciences. In autumn 1960, graduates who had recently joined the reactor's staff pointed out that the standardized project is already out-of-date and persuaded the constructors to modify it. Graduates built a new device for preparation of 50 m³ of distilled water that was necessary for the pool. This device allowed to produce water much faster and was also cheaper than the original one. Another modification was the control room desk. In the original project only one person could work with it while in SRR two main workspaces and several extra workspaces were created.[18]

During the construction works the reactor was a secret object and was named “Object IRT”. Materials for the reactor were received from “post boxes”. For instance, “Post Box No.3” stood for fuel. The employees could not travel abroad, expect for business (conferences, etc.) and they were not allowed to meet foreigners alone, only in pairs. After such meetings both persons had to write down what they had talked about. Despite all secrecy around it, SRR was open for visitors after it was put into operation. It is presumed that more than 50,000 people, mostly pupils, have visited it between the 1960s-1990s.

Reconstruction works were necessary due to several reasons. One of them was the problem with EK-10 fuel. Its rods started to curve in the active zone of the reactor and created danger of loss of hermetism. Another problem was corrosion in the pool's aluminium vessel. Aluminium was replaced with stainless steel.[19] The Reactor's nominal thermal power was increased from 2 to 5 MW.

SRR was the only research reactor in Latvia. Neutron activation analysis, nuclear reaction research, researches in solid state radiation physics, radiochemistry and radiobiology were carried out there. They were mainly done for scientific and medical purposes.

Physicists from SRR cooperated with physicists from different research reactors, other nuclear facilities and institutes of physics in the Soviet Union (for example, in Leningrad, Moscow, Belarus, Georgia), had partners abroad (for instance, in Germany, France, the Czech Republic) and carried out contract jobs. Also the Reactor had trainees from Iraq, North Korea and Libya. Specialists from SRR have worked in Iraq and Libya.

After the collapse of the Soviet Union in 1991 Russia stopped to sell uranium to SRR. However, it did not affect the reactor. SRR usually used 4-5 bundles per year but the administration always ordered 7-8. These reserves where still used in 1998 when the reactor was shut down.

The decision to close it was made in 1995. On May 16 the Cabinet of Ministers issued the order[20] to shut down SRR and requested to start the preparation of a concept for decommissioning. When asked to comment it, the government explained that nuclear energy and nuclear programs are not among state priorities. Safety reasons were also mentioned.[21]

Spent fuel – 78 bundles, radiation on the surface: 6000 R/h - was sent to Mayak Production Association , Russia three years later. The enterprise’s press service reported the train load of spent nuclear fuel to have arrived at Mayak on May 15, 2008.

Both of these deliveries were carried out based on an agreement between Latvia and Russia and in cooperation with the USA.

In 2013 the University of Latvia replaced the Latvian Environment, Geology and Meteorology Center, Ltd. as the operator of the facility, planning to develop a cyclotron center there. A cyclotron is a type of particle accelerator[22] and has several usages. In medicine it can be used for cancer treatment and diagnostics of cardio-vascular diseases[23]. University of Latvia also intended to export the developed medicinal products and conduce scientific researches. Export was considered because there are no cyclotron centers in neighbouring countries[24].

In October 2014 the University announced that they hope to repair both external vaults of the reactor by the end of the year to prevent them from leaking[25]. The vaults were built in the 1960s and had never been checked before. The Government confirmed an initial grant of EUR 119 340 for this purpose, total costs were supposed to be known later, after the Univerisity would have made a schedule. Works were expected to commence in November.[26]

In December 2014 a small leakage started from one of the vaults increased the level of tritium to 10 Bq/l. The limit is 100 Bq/l.[27]. The leakage was stopped, but in January 2015 the Ministry of Environment informed that there might have been another leakage, this time from the other vault[28].

Another potential threat is the main fuel tank as it is made of a lower quality material[29]. Also there is a crack in one of the outer walls, from the floor to the ceiling. It is so wide that it is possible to see through it[30]. Due to low funding the entire facility is operated by only nine people[31]. The building itself is poorly maintained. The temperature inside it is only +10 C° in winter[32], which is enough to prevent the water inside the reactor from freezing but not enough to keep the building in a good condition.

At the beginning of January 2015 the Government granted another EUR 15 000 for immediate maintenance works.[33]

On January 19, 2015, in a press conference, the University announced that they are considering to terminate their contract thus ceasing to be the opeator of SRR if they do not receive financial support from the Government. Maintenance of the facility costs approximately EUR 200 000 a year and it it too expensive for the University.[34]

In February the Government announced that the sum of EUR 300 000 would be granted in 2015 for the maintenance of SRR[35].

At the beginning of February 2015 it was announced that the Latvian Environment, Geology and Meteorology Center, Ltd. will became the operator again. The change is expected to take place in April 2015. However, the University is planning to continue the development of the cyclotron center.[36]

The relevant technical co-operation project on decommissioning the research reactor was submitted to the IAEA for 1997/1998. There were 5 expert missions from the IAEA from July 1997 until June 1998. The conclusion was, that the total decommissioning and dismantling costs would amount to ECU[37] 17-20 millions.

In 2000, the following budget plan (price base 1998) statements for the decommissioning and dismantling of SRR were made.[38]:

Approximately 1200 m³ of waste would be generated during decommissiong.[39] It will be stored in "Radons".

The decomissioning process started in May 2008 when the spent fuel was sent to Russia. Decomissioning was supposed to take five years. These plans were interrupted already at the end of 2008 when the country got into recession.[40]

In October 2014 the Ministry of Environment informed that they are looking for all available sources of funding, not only EU funds.[42]

In February 2015, after announcing addtional funding for the maintenace of SRR in 2015, the Government also announced plans to finally finish the decomissioning. The current costs are approximately EUR 5.5 million and the decommissioning should be completed in four years, commencing in 2016.[43]

The source of funding is currently unclear as the Government is struggling to find funds already for the maintanance costs. The sum mentioned above, EUR 300 000, will be taken from funds for force majeure cases. The Government also informed they might need to sell some of state real estates.[44]

After a Government meeting the Prime Minister of Latvia Laimdota Straujuma said that the current situation is unacceptable and this issue should finally be sorted out.[45]