Action:Infotour Around The Baltic Sea 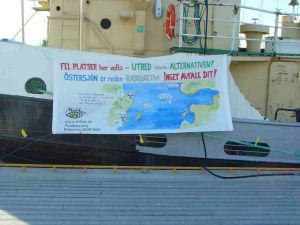 Baltic Sea - the most radioactive sea in the world!

The idea of this "Baltic Sea Infotour" was created at the future campaigning workshop meeting at the NUCLEAR weekEND in Isnäs (FIN) in October, 2008. A first bigger planning and promotion meeting will be at the Youth Environmental Congress which takes place in Frankfurt/Main on 1 January, 2009.

What we talk about: info tour with actions, info events, meetings; transport the idea of international networking + radical environmental actions, ...

Infotour Around The Baltic Sea

The Baltic Sea is the most radioactive sea in the world - thus we think it makes sense to inform about nuclear power and its risks. This Workshop is about the idea to arrange a (maybe caravan-) infotour around the Baltic Sea in summer 2010. That way we want to come in contact with local initiatives, do action, take part in information event and organize some of those events ourselves, have network meetings with local activists, spread information about nuclear issues and maybe other topics, too.

The workshop we will hold on 1st January, 2009, from 14:00 to 16:00 am shall inform you about the idea and wants to motivate more people to take part in the organizing process of this infotour. We will talk about our ideas and what has to be done to realize this project. We would be happy to get new contacts for this issue and to meet new interested people doing it together with us.

More information about this workshop you can get from Falk[1] and via the phone number +44 7624 1948 77 (yes, it is really a British mobile phone!). There are much more international anti-nuclear workshops and meetings planned at the JUKSS - so have a look to: http://nuclear-heritage.net for more information.

We thought we should have preparation meetings every some months (to see each other in reality from time to time and not to depend completely on virtuell communication like email). First ideas: