In Russia these days there are 10 nuclear power plants with a summmary of 31 operating reactors, that cover 15 percent of the country’s electricity needs. In 2004 these reactors produced 21.740 MWe. Seven of the reactors have recently been granted a prolonged enginnered lifetime for 15 years. That means that intended engineered lifetime of aged reactors can increase from their 30 year intended term of service up to 45. Half of the country’s reactors are considered high-risk by experts, eight of Russia’s 10 nuclear power plants are in the European part of Russia, East of the Ural, two others are east of the Urals ― one in Far Eastern Siberia. Civilian nuclear power plants in Russia are owned and operated by the state-owned Rosenergoatom company.

For several decades spent nuclear fuel from European countries and from European Russia has been transferred for storage to the Gorno-khimicheskii kombinat (GKhK) factory (in the closed nuclear city of Zheleznogorsk, Krasnoyarsk Territory) and to [Kyshtym Disaster|Mayak] (in the closed nuclear city of Ozersk, Chelyabinsk region). To date, a gigantic amount of nuclear materials and radioactive substances has accumulated here. In the minds of the residents of Europe, the impression is that such a transfer to closed, opaque cities in the Urals and Siberia is a safe solution to the problems. This is not so![1]

Over the years of the existence of GKhK and Mayak there have been several major accidents which have caused the pollution of vast territories. Moreover there has never been a proper assessment of the consequences of these accidents on human health and the environment. Activities of social and environmental rehabilitation of these areas in order to protect residents have not been properly carried out.[1]

The current promotion of the construction of new facilities associated with the processing and disposal of nuclear and radioactive materials on these territories will not increase the nuclear and radiation safety in the regions where they are being placed. The current practice in Russia of decision-making for siting nuclear facilities is not consistent with the principles of a government based on the rule of law. Decisions are taken by the leadership of the state corporation "Rosatom" based solely on its economic interests. There is not adequate participation of the government authorities of Krasnoyarsk Territory, Chelyabinsk Region, local governments, or Russian citizens living in the area of ​​the potential impact of these dangerous sites.[1] 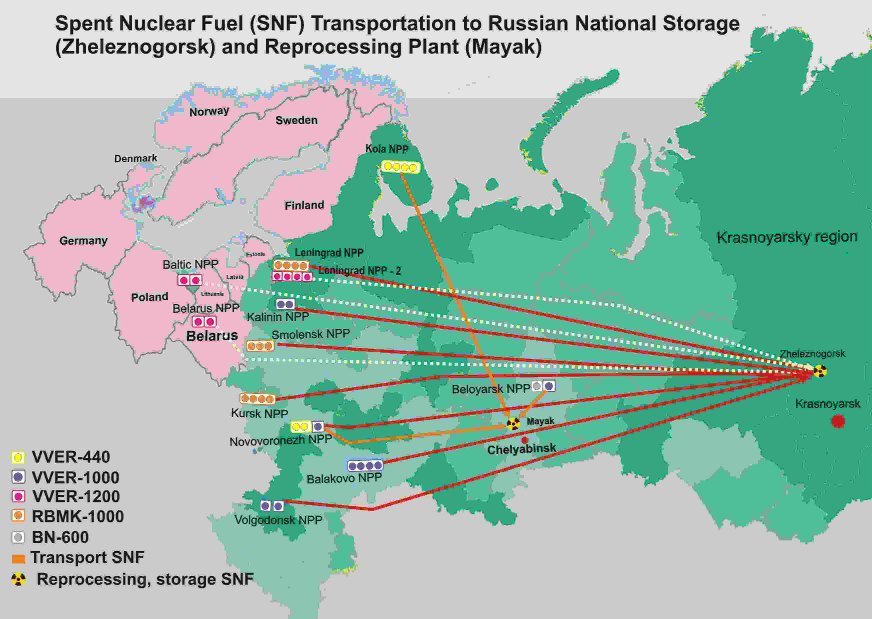 ST. PETERSBURG - “Nuclear monsters” laid a faux foundation for the Leningrad Nuclear Power Plant 2 (LNPP 2) during a protest in central St. Petersburg a week after the ceremonial laying of the cornerstone for the actual plant’s first reactor in the town of Sosnovy Bor, 80 kilometres west of St. Petersburg, where the actual nuclear station will be built.

Activists from all over europe and russia (about 50 persons) gathered in a 'tent city' near Nizhniy Novgorod to participate in a 2-week anti-nuclear camp, which consisted of demonstrations and protests, music shows, workshops, movie shows & etc., to make the citizens of Nizhniy Novgorod aware of a new NPP that's planned by Rosatom to be built in Novgorodskaya area. 20 Years ago the administration of Novgorodskaya area tried to built another NPP, but due to the public activity the construction was stopped on a 75% completion and never started again. Raids with leaflets & small demonstrations took place all the time, ended up with a final demo & artistic show at the end of a camp. File:Camp.jpg

The camp located on a river near Nizhniy Novgorod and consisted of about 12 ecologists from different parts of Russia. Lots of workshops (such as protest tactics, nuclear distribution and exploitation, renewables, etc.) and a 10x10 banner 'NO NPP' hanged from the Kremlin wall as a result. File:Banner.png