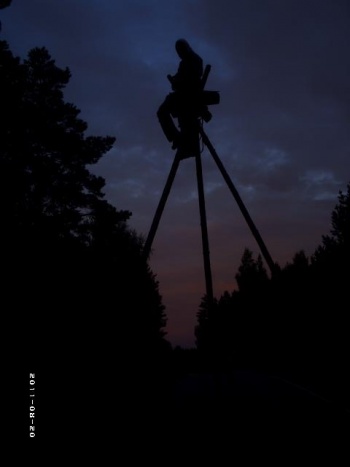 In the morning of August 20th at 5.30 AM activists started blocking the roads to the atomic power plant Olkiluoto. About 100 people joined the protests blocking twice the main access road to the nuclear site and also blocking a smaller access road with a tripod. Some 50 people were detained by police and released until the evening.

Since the very early morning of August 20, 2011 a tripod with an activist on the top closed for two hours an access road to the Olkiluoto NPP. The police had to ask a fire fighters engine for help to get the activist from the tripod and to take the construction from the street.

Invitation to the evaluation and planning meeting

Welcome to participate in the Olkiluoto-Blockade weekend 10-11.9 in Tampere!

During the weekend there will be two meetings: On Saturday we will go through the work-process behind the Olkiluoto Blockade 2011, and form the principles for the next year of action. Please be on time!

The meeting / remembering evening on Sunday is open to everyone. There we will remember even more and also plan further (based upon the principles decided upon in Saturdays meeting) for the coming year's anti-nuclear activities. Meetingplace is at the Railway Station 13 o'clock.

If you need to stay overnight or you can provide accommodation, please contact: olkiluotoblockade AT riseup.net[1]

A blockade of about 100 activists from Finland, Sweden, Germany, Russia, France, United Kingdom and Belarus several times stopped the traffic on the access roads to the disputed Olkiluoto nuclear power plant in Finland. Police had announced to prevent the blockade of roads that were supposed to take place for the second time. They forced protesters from the streets again and again towards a bus stop nearby. Nevertheless, the activists succeeded several times to blockade the main access road to the NPP for some minutes, while an additional access street had been closed for some two hours by a wooden tripod construction with an activist on the top.

"We are in Finland. Here the police decides."

When a group of international journalists was picked up by police within the restricted area, they were faced to the Finnish police's understanding of justice: "We are in Finland. Here the police decides." - A direct quotation of a police officer who rejected to tell their name. In conflict with the freedom of press, the police strategy was - similar to the 2010 blockade - not to allow journalists to enter the huge area between the main highway E8 and the Olkiluoto peninsula. This area covers several small villages as well as forests and beachs that are according to Finnish law under "everyone's right". It is public, people can basically put up their tents and camp or enter the area at all. The Finnish police made a closed region out of these villages and tourists spots - most probably in conflict with their own laws. The leader of this police operation and thus responsible for this breach of basic rights was Jussi Högman. When they were sending the journalists away they were always refering to § 18 of the Police Act.

Olkiluoto is a peninsula at the western coast of Finland and one of two atomic power plant sites of the country. Currently the trouble reactor Olkiluoto 3 is under construction there. It was supposed to come into operation already in 2009, but so far hasn't been finished yet. Instead, the costs climbed nearly to the double of the projected number, and hundreds of construction failure have been critized by the authorities so far. Partial interruptions of the construction were also caused by these faults. The french company Areva with participation of the atomic branch of the German Siemens company is the leading constructor of the prototype of the EPR, the so-called "European pressurized water reactor".

Summer last year the Finnish government and the Finnish parliament decided in contrary to the for Finnish conditions strong protests to support the construction of some two or three additional nuclear reactors. No one in Finland needs there energy. Instead, the nuclear lobby hopes for profitable export earnings. Strangely enough, basically all new NPP projects around the Baltic Sea calculate with exporting their atomic electricity, although there is already an excessive supply of energy. Germany for instance, the country that closed seven nuclear reactors in consequence of the Fukushima disaster and that is seen internationally as "the" nuclear phaseout state, is still exporting electricity to the European market. However, in Finland the construction of Olkiluoto 3 is mostly a strategic project of the French-German nuclear industry that urgently needs a model NPP to be able to sell the EPR internationally. Costs obviously don't lay a major role.

On 20th of August 2011 the Olkiluoto Blockade took place for the second time gathering people from several regions of Finland and from other European countries on the streets. One year ago, on August 28th, 2010, it was the very first public street blockade of an atomic facility in Finland ever. It had been started with the support of a number of European and Finnish environmental and anti-nuclear groups. The gathering of the Nuclear Heritage Network, an international network of anti-nuclear activists, taking part in March 2010 in Helsinki had initiated the idea of the blockade and developed it together with the variety of Finnish NGOs and groups. The goal was to question the international reputation of Finland as the country of the so-called "renaissance of nuclear power", and to show that even in this country being under strong pressure of the nuclear lobby atomic power has noch support of the citizens.

For Finnish anti-nuclear activists the Olkiluoto Blockade was also an important occassion for meeting each other and exchanging as so far there doesn't exist any other nationwide organizing structures for a common anti-nuclear strategy. In the south as well as in the north strong networks of local initiatives and organizations exist and in some cases they successfully opposed to projects of uranium mining and new NPP constructions. However, cross connections between those groups and networks are created so far only in mutual big actions like the Olkiluoto Blockade or the anti-nuclear infotour around the Baltic Sea that also took place in 2010.

Six a clock, early the morning in Finland. While the sun rises Samba music and megaphone of anti-nuclear power activists sounds through the Finnish forest and across the main road E8 leading to the nuclear power plant (NPP) Olkiluoto. People are sitting, singing and holding banners close to the road. They are here for the official demonstration against nuclear power and the construction operations at the Olkiluoto NPP.

The official demonstration started at 6.30 am. At this early hour a group of 50 activists already blocked the main road. However, loads of police soon started to remove the people rudely by pushing and pulling them from the street and back to the roadside. Four people got arrested in the first attempt of a road block, and had to remain in a yellow public transport bus that had been chartered by police in order to be used as a prisoner transport.

On another small road, in Sorkantie which also leads to the power plant a small group of some ten activists blockaded the access road to Olkiluoto with a tripod in the very early morning. They were surrounded by the police stopping other acitivists to reach the place. After one hour of successful blocking they got arrested by the police.

People here are demonstrating for a safer planet and a future without environmental problems. They want to set a sign to the Finnish government showing that people do accept neither the use of nuclear power and nor the construction of the Olkiluoto 3 power plant.

At 8.30 AM a second attempt of a blockade on the main access road was started. Similar to the first time rude police cleared the road quickly again. Further 45 activists got detained and were first took to the prisoner bus and later to the police department in Rauma.

The remaining 30 demonstrants kept on playing music, singing, juggling and other creative ways of protest while they were showing anti-nuclear banners and signs, waiting for support and nice food cooked by volunteers. The demonstration kept calm the whole afternoon and the load of police officers spent their time eating ice-cream, gambling and having coffee and cigarettes. Who is going to to pay for this?

At 3 o´clock six of the arrested people got released and were picked up by other activists giving them a lift back to the demonstration. There anti-nuclear power activists kept on demonstrating whith support of a live band playing their great music…

Invitation to the blockade

Anti-nuclear people are invited to converge this year on 20th of August around Olkiluoto nuclear power station on an island on the west coast of Finland to demonstrate for a future free of atomic threats. While big companies reap the profits made from nuclear power, the consequences of the radioactive pollution are inflicted on ordinary people all around the globe. As decision-makers do not act in the interests of the people, pe...ople must take action. Join us!

The first Olkiluoto blockade action of 200 people took place 28th of August 2010. People were dancing, sitting, chatting, chaining, eating, singing and watching several performances on the roads on Olkiluoto. Others blocked access roads with lock-ons. The event stopped the traffic in the main road leading to the power station for the whole day, for shorter times the main highway nearby and also smaller roads leading to the nuclear facility.

Feel welcome to join this year for a bigger brighter blockade!

There will be more information about the event and how to join in the blockade-blog:

Underneath some links to information and photos from last year: