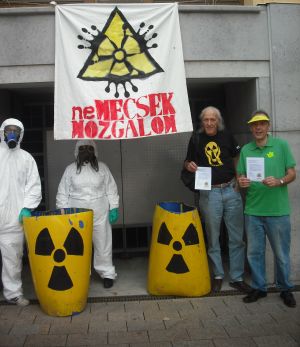 Anti-nuclear groups and organizations in Hungary

The neMecsek Movement (Ne Mecsek means "no Mecsek", the name of the hills around Pécs), is working in cooperation with a few local non-profits, activists, and politicians to stop the opening of the mine. We hold local community forums, actively engage the media and the local politicians, and stage public actions.

Declaration of the members of the neMecsek Movement

On February 7, 2012, a cooperative agreement (contract) was signed by the two state-owned Hungarian companies (Mecsekérc Zrt., and Mecsek-Öko Zrt.) which were incorporated after the closure of uranium mining activities in Pécs, and an Australian company, Wildhorse Energy, with the explicit goal of restarting uranium mining in the Mecsek Hills around and underneath the city of Pécs, in southwestern Hungary.

On March 29, 2012, in spite of an attempt to keep the question from becoming public, the local government was pressured by citizens to delay voting on a proposal to allow explorative drilling by the company on city property, immediately bordering lots with private homes.

On June 26, 2012, the Hungarian government officially sanctioned the creation of a joint state-private initiative to explore the reopening of the uranium mine on the edge of Pécs. This is to be directly overseen by Mrs. László Németh, Minister of Development.

The government directive states that the new corporation will complete a study of the feasibility of uranium mining in the Mecsek Hills, upon which the government will base its decision to support the project or not.

Our goal is to prevent uranium mining in the Mecsek Hills. We won’t accept a uranium mine under Pécs!

For these reasons, the members of the neMecsek Movement, and the undersigned supporters of the movement, encourage all citizens to gather information to make a decision on this issue, make their opinion heard, and organize within their own network of friends and contacts. We must demonstrate that we have the courage to express our opinions as citizens. Let us show our government representatives that we will not simply stand and watch as events influence our lives, but we will stand up for ourselves, for our environment, and to protect the quality of life of future generations.